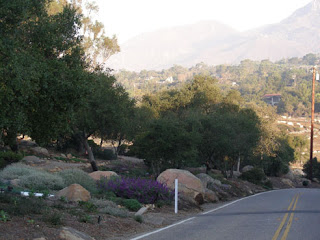 Smoke from the Sedgewick Fire at Sunrise

The Zaca fire had Santa Barbara packed and ready to move. The environmental, health and financial impacts will reverberate for a very long time. Yet how fortunate were we to have favorable weather and tireless efforts from local and faraway firefighters?

Seeing what’s going on in the Southland this week, we can hardly complain. As of this writing, there are over 500 structures destroyed, hundreds of thousands of people displaced and lives turned on their heads. On NPR this morning was the story of a single dad with 8-year old twin girls (one of them asthmatic) who were awoken in the middle of the night and told to get out. Left behind where pets (three goldfish named Larry, Moe and Curly, plus a cat), cell phone, credit cards - you get the point. The apartment complex burned to the ground – how do you console your daughters and start over? I can’t even begin to imagine.

So this morning, I drove to Santa Barbara’s Firescape Demonstration Garden at Mission Ridge and Stanwood Drive (right across from the fire station near the Sheffield Reservoir). Earlier this year Owen Dell (the other Garden Wise Guy) and I redesigned this invaluable resource co-managed by the City of Santa Barbara Fire Department and the Water Conservation program. 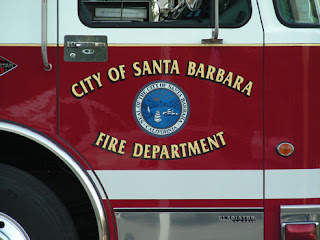 The purpose of the Firescape Garden is to educate homeowners in fire prone areas about the best way to create defensible space around their homes. For more information about how to create a more firesafe landscape, read the City of Santa Barbara guidelines for landscaping.

The demonstration garden was given a complete face-lift after almost 25 years of service. Lots of plant material was removed, attractive plants were arranged as they would be used in a home garden, and the principles of protecting your home from wildfire were implemented.

The purpose of this blog post isn’t to explain those principles in detail, but to encourage readers to take proactive steps to give fire fighters a fighting chance to protect you and your neighbors. It’s actually quite simple – manage the potential fuel around your home and break the “fuel ladder.” 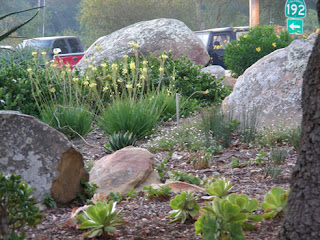 If you live in an area that would even remotely be vulnerable to wildfire (remember – the Paint fire crossed Highway 101 and jumped into Hope Ranch before the weather miraculously turned the fire back on itself) promise yourself that you’ll visit the Firescape Garden, read the material posted on the kiosks, have someone from the fire department visit your home for an assessment, and be prepared to make some changes to your landscape.

The following photos show the garden today, just a few months after its June 2007 installation. It might not make the cover of Sunset Magazine just yet, but it’s heading that way. There are many styles of plants (not just succulents and rocks) for many situations. No excuse; you can do this. What would you rather do – sift through the ashes or make a few compromises in your garden?

Sorry for the lack of pithy humor that is my trademark. This is deadly serious stuff. 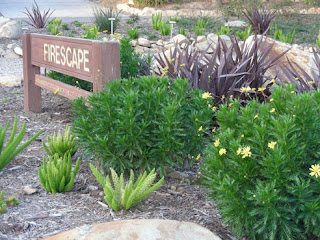 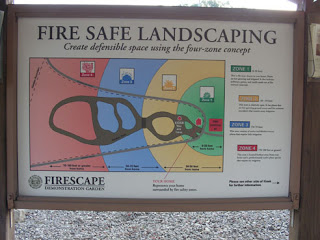 Info kiosk - here's how it works 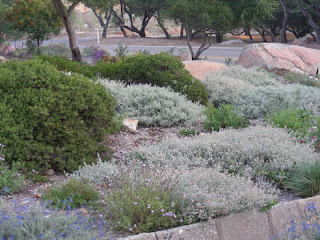 Santa Barbara Beauty In The Eyes of This Beholder

O.K. - I recently cleansed my system by ranting about the ugly stuff, the butt-ugly stuff and the fugly stuff that pervades this otherwise beautiful city. It's way too easy to find good examples of really bad stuff, then rip a few hundred words on the keyboard. Now I'm not saying I feel any guilt about it, but I've challenged myself to find something nice to say, because there truly are some stunning plantings, buildings and garden artifacts to be grateful for.

So on the heels of the real Santa Barbara Beautiful Awards bestowed last week at the Lobero Theater, here is my version of what floats my boat. I laid out some simple ground rules: grab my trusty little Nikon CoolPics camera, leave for work on foot a few minutes early, and find those special places and things that just seem to get my endorphins pumping. Oddly, many of the same images that caught my eye have been featured at the Edhat website over the years. Guess that great artists think alike.

The Fountain at Micheltorena and State: 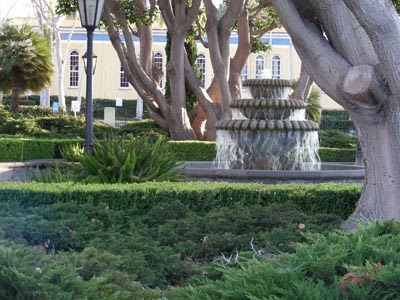 How fortunate are we to have such a prominent piece of private property preserved for the public? I don't know the history of this space, but the generosity of its original owner is, for me, like having our own Andrew Carnegie bestowing his philanthropy on the city. But in this case it's a glorious fountain, a graceful canopy of Coral Trees and the immaculate grounds below.

A few steps down the State Street and just being kissed by golden morning rays is one of my favorite facades. 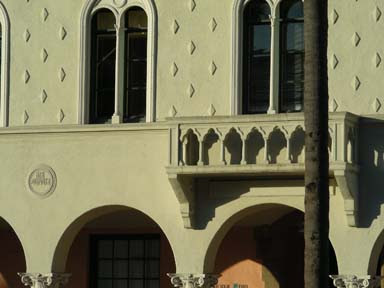 There's something about the simplicity of the pattern on the diamond-shaped medallions that thrills me. It's the same restraint I often unsuccessfully seek in designing a garden - the willingness to totally commit to one simple idea and to state it boldly.

My favorite Agave sets down roots at the local mortuary parking lot--State and Sola. Not quite sure who the designer was, but I know that local landscape contractor Debbie Shaw was involved in the installation a few years back. The plant combinations work very nicely, but the ultimate pairing is Agave vilmoriniana (Octopus Agave) and Sencecio mandraliscae (Blue Chalk Fingers). They kind of make me wonder if Georgia O'Keefe was also doing genetic engineering on desert succulents.

Three great finds in just a few blocks - then is was slim pickins until I hit the area around the main post office. But I knew where my next quarry lay. Down a lesser known alley (Presidio Avenue) is Jake's Fountain. At least that's what Lin (my spousal support unit) and I dubbed it years ago. Long story, but I had a structural engineering professor who loved all things pachydermian. 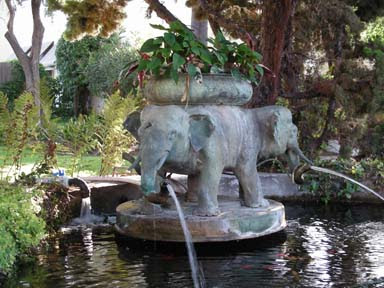 Nestled under spreading Tipu trees and flanked by stately Queen palms, the original grace of this fountain is now marred by some pretty fugly netting designed to keep hungry herons and egrets from chomping down the fish that swim in the main pool (not visible in this shot). This is like covering the Mona Lisa with razor wire to prevent it from being stolen, but blocking the beauty of the art. For my money, I'd adopt out the fish and restore the fountain to its unfettered glory.

Last on this list is a well-known architectural gem - the Meridian Studios, designed by none other than George Washington Smith and Carleton Winslow. This complex of offices and artist studio were added to the historic Lugo adobe in the mid-twenties. 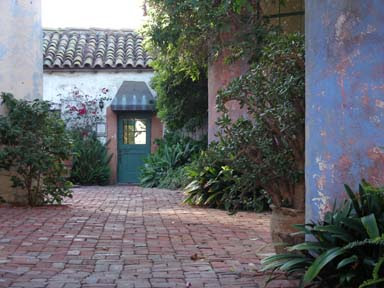 The scale of the buildings and the distinctive coloration is a well-known landmark downtown. There's nothing like it that I've seen in my travels, and is just one of those places you bring out-of-town guests to show them how much cooler SB is than wherever they came from. I'll never pass up a chance to walk down this block of De la Guerra St. to take a quick peek at the narrow courtyard, worn bricks and brilliant wrought iron work.

Nuff for now...just wanted to show that I can be counted on to see not only the incredible absurdity of what some people do in the name of design, but also show proper respect for those special places that make Santa Barbara such a unique place to live.
at 9:59 PM 4 comments: