I’m a Little Gray About Green

[This article is a reposting of my bi-weekly Santa Barbara column at Edhat.com]

I had a disturbing dream last night. I don’t think it had anything to do with the quart of Baskin & Robbins Chipotle Brickle I scarfed down before bed. I’m made of tougher stuff than that. It was one of those moral dilemma dreams, where you can’t figure out which road to take. More than likely, it was induced by the article I’d read in the L.A. Times the previous week.

What caught my eye was the photo of Jean Orban, a smiling middle-aged suburbanite, laying in her front yard, gently caressing her green lawn. The headline read “Orange County cities review ban on fake grass.” Seems she’s installed fake turf in her front yard and there’s an ordinance against that in her fair city. Not only might she have to remove her greensward, but there is a fine that could be levied.

She’s stuck between a rock and a hard place. The city enacted the ban years ago when drought-stricken homeowners were laying down acres of bright green plastic that looked like the icing on a Timothy Leary cupcake. These days, the new faux sod looks more like the real thing. Now, instead of the $300 rebate she has coming from the Orange County Metropolitan Water District for customers who install artificial turf, the taste police in Garden Grove want her and a whole lot of other people to rip the stuff out. So she’s getting lots of publicity and the powers-that-be are starting to reconsider. I’m not sure if I want her to prevail, but as a bureaucrat myself, I enjoy seeing David standing up to Goliath.

My initial reaction was that artificial turf in a garden is an abomination, like the plastic flowers my mom used to twist around the jade plant in our back yard. However, (I can’t believe I’m going to write this next phrase) I was at a landscape trade show a few months ago and have to admit that, at the time, I thought there might be situations where I could use this stuff in a project. But after reading the LA Times article and doing some research, I’m not so sure. I operate on the philosophy that gardens need to be sustainable and there are a lot of gray areas in this patch of green. After all, I’m one of the Garden Wise Guys who co-hosts a sustainable landscaping TV show on Cox 18. I should have THE answer. No such luck. Let’s see if we can work this out.

The arguments AGAINST faux turf:

1) Fake grass is made from crude oil. You’re all aware that we’re in a bit of a bind from our love affair with oil. I have a hard time justifying off-shore drilling to satisfy the need for a plastic lawn.

2) It gets freakin’ hot. On a sunny, 80-degree day the surface can range between 130 and 165 degrees. This, in turn, contributes to the “heat island effect”, making the surrounding environment toastier. Not exactly the place for a backyard picnic or wrestling with the dog. A real grass lawn is about fifty percent cooler. I like that.

3) Plastic doesn’t sequester carbon from the atmosphere – grass does. Based on NASA satellite data, there are about 40 million acres - not square feet, acres - of tended turf in these United States. I’ll wait while that sinks in. This accounts for about 13.2 million pounds of carbon sucked out of the atmosphere every year. That sounds like a strong argument for bigger, greener lawns. However, this benefit is negated by the manufacturing of lawn fertilizer and the greenhouse gas-producing effects of mowing. More on this later.

4) The cost of a faux lawn installation can run from $8 to $15 per square foot (expect a 10-15 year lifespan). Typical quarter acre homes frequently have as much as 3500 s.f. of their landscaping in turf. I can think of better ways to part with fifty grand.

5) It’s made from polyethylene, which is not biodegradable. It can be recycled, but then there’s the energy expenditure to convert it into something else.

6) If it’s not getting watered and there’s not much organic material cycling through the soil, there’s really not much habitat for the flora and fauna that live in the soil. Thinking about refugee camps filled with millions of earthworms throws me into major guilt trips.

The argument FOR faux turf:

1) It doesn’t have to be watered, 2) fertilized, 3) sprayed, or 4) mowed. That saves resources, reduces the amount of chemicals that run off into the creeks and eliminates the exhaust from inefficient gas-powered mowers.

6) If you get a tiny windmill, you can pretend you own a miniature golf course.

That takes me back to the green moral dilemma. How do you calculate the balance? Save water while wasting oil; reduce noise while burning your feet. Arrrrrggggghhhhh!

There are at least two ways around it. One would be giving up your attachment to turf (can we start a 12-step program?) and letting go of that post-WWII suburban icon that has no business existing in our eighteen-inches-of-rain-a-year climate. The definitive work on this is American Green: The Obsessive Quest for the Perfect Lawn by Ted Steinberg.
There are plenty of ideas for attractive, sustainable non-turf front yards out there and the local water districts have many great resources to get your design engine started. I’m a fan of growing something edible anywhere you can, but if that’s not your style, there are still plenty of options.

The other route, for you die-hards, is to reduce the size of your lawn to the bare minimum you need for recreational (not ornamental) reasons and manage it in the most environmentally responsible way.

Consider a drought tolerant variety like Buffalo Grass or Bonsai Fescue, irrigate it with a Smart Controller (they use satellite info to adjust to real-time weather conditions), trade your gas mower for a push mower, and use only organic fertilizers to avoid toxic run-off. You’ll produce less carbon dioxide, save water and work off those love handles.

So maybe my moral dilemma is solved. Take a pass on the plastic, ditch the lawn where possible or care for it in an environmentally responsible way. For more on the wrath of grass, check Susan Harris’s Sustainable Gardening blog.

I close with a bit of trademark Santa Barbara snobbery – the setting for the Times article is the OC. Perhaps we’re safe, since there’s no one up this way who would even consider a petro-lawn, at least not in the South County.

[NOTE: One of my favorite bloggers, Susan Harris, has a post on the same subject at her web site.]
at 8:23 PM 9 comments:

The Wonderful World of Variegation

Boy, it’s been a while since I contributed anything to Green Thumb Sunday and it’s about time to rectify that oversight. I’ve been doing so much writing for a couple of magazines and a web site that the time just gets eaten up. So I was rummaging around through my iPhotos and noticed I’ve been accumulating a lot of shots of variegated foliage. I tend to photograph those things that I emphasize in my designs and in my classes, so I’ll have plenty of examples for clients and students.

Since I’m a fanatical believer in the design philosophy of building a garden design around a strong framework of plant forms, contrasting densities, and foliage color (and only then laying on the floral color) variegation becomes a very important component in the overall recipe.

Consider how this variegated Pittosporum plays against the Photinia. Although there is a solid green version of the Pitt, look how much more contrast can be achieved by pairing the lighter colored leaf with the darkness of the other. 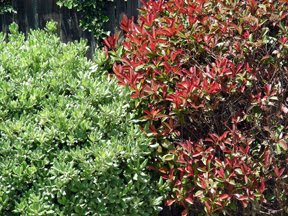 I even like the Pitt all by itself, especially in front of this fence – as cheery as white pickets are on their own, the milky edges of the foliage just amp it up one more notch. 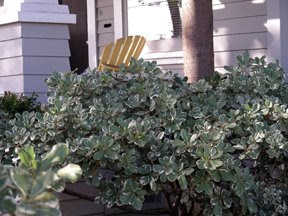 When I designed this little spot in front of a client’s house, I started with their request for a couple of hydrangeas and a sasanqua camellia (outside the frame) as the anchors for the bed. When it came time to pick a few more plants to trim out the edge, the variegated Liriope seemed like just the right touch – the white striped amplified the hydrangea leaf, but the grass texture gave me the strong contrast I needed to change up the visual texture. 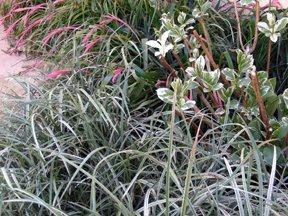 Silver Dragon Liriope creates a completely different effect with the gentle pink of these little roses. I’m always a sucker for pink and variegation, which further softens the tint of the flower. 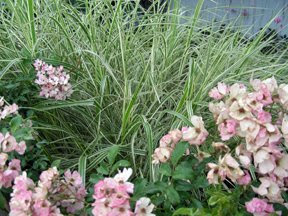 Here’s another stand-alone – plain old Pelargonium, but with a sweet edge to pick things up. 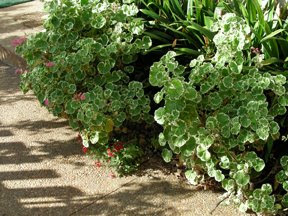 Here’s a step toward the bizarre – Euphorbia ‘Helena’s Blush’ sports a yellowish-greenish pattern around the bracts of the flowers. Paired with Salvia x jamensis ‘Sierra de San Antonio’ the creamy combo is almost other-worldly. 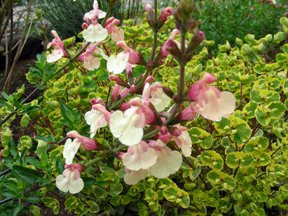 And the long shot shows the entire composition, adding Ballota (Grecian Horehound) as the big contrast to finish it off. 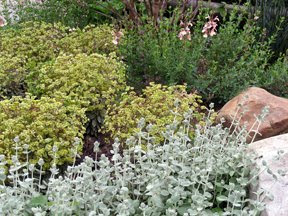 So be the first on YOUR block to explore the wonderful world of variegation!
at 9:14 PM 5 comments: