I Wanted To Call This Post "A Tale of Two Titties" 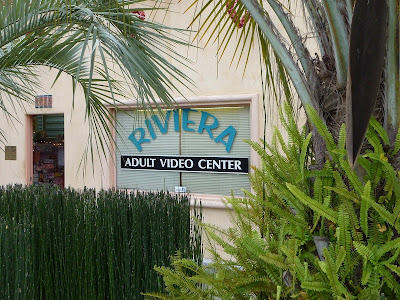 I don't know how many adult video stores also feature well-designed gardens, but Santa Barbara's got one. And I found it purely by accident while I was capturing a few more images of moronic Crimes Against Horticulture next door.

Excerpt: The garden sits in front of the Riviera Adult Superstore--the Blockbuster for lonely guys; the Toys R' Us for consenting adults. I stood paralyzed in the driveway that separates two botanical worlds: Looking east, a garden worthy of Hannibal Lecter; to the west, Lao Tsu.

Now, turn down the lights, put your favorite Barry White album on and click here to read the rest.
at 11:26 PM 1 comment: 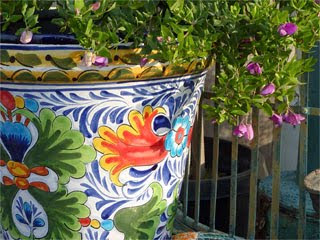 Author's Note: One of the fun things about writing for Edhat readers in my hometown of Santa Barbara is that I can title my blog "Pot Dispensaries" and no one bats an eye. Sure, the picture is a dead giveaway, but much like naming your band "Free Beer" so folks will mob your gigs, there's nothing like a provocative headline to suck all those prurient readers in.

Here's how I got it started...

Last week the Obama administration signaled a more lax attitude toward pot dispensaries. I breathed a sigh of relief, feeling a dark cloak lifting from my conscience. No longer must I drive with one eye on the rear view mirror, one on the road and the other on my incoming Twitter feed. After decades of living in the shadows, I'll be hanging up my Unabomber hoodie. "Gimme that 28-inch Vaso Louis terracotta!" I'll say, head held high.

Flower pots are nothing new. Whether it's the empty milk carton I used to sprout an avocado pit for my third-grade science project or an exotic high-fired, crackle-glazed urn from China, there are hundreds of reasons to grow plants above ground.

Click through for the whole article and luscious pics.
at 9:54 PM 6 comments: 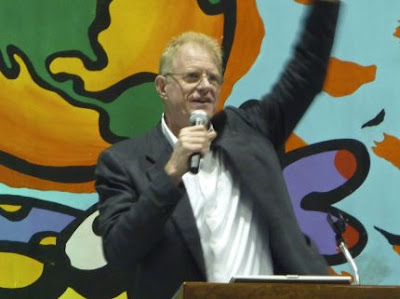 I'm all for making the world a better place and the buzz word for getting there seems to be "green." But who decides what passes for green? No, I don't want another agency certifying who is and who isn't. But Jeez Louise, can't we tighten the definition to exclude healing crystals, eco-friendly dog obedience classes and all the other New Age crap that some folks try to foist on us?

This blog post is a follow-up to my trip to the LA Go Green Expo, which was 90% supah dupah and dead-on in my book. But I had to have a LITTLE fun. And Ed Begley Jr. just qualified for the title of "Green Mensch" and all around fun guy. 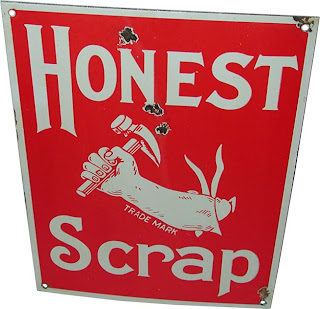 If you say the title fast, it sounds like Honest Crap - sort of an oxymoron. Anyway, Barbara Wise at her BWiseGardening blog, wrote a revealing "things you probably don't know about me" post as part of the Honest Scrap Awards. It goes something like this...The award has two components: First, you list ten honest, interesting things about yourself and then you "present the award" to seven other bloggers. It's more "tag, you're it" than an award, but here goes.

I'm injecting the truth serum now and hoping the statute of limitations has run out on a few of these tidbits.

1. In my rock 'n roll drumming days, I worked in Las Vegas, Little Richard came to hear us, joined us on stage and I got to play with drums behind him.

2. Staying with the rock & roll theme, my high school band, A Little Bit of Sound, won the biggest battle of the bands in SoCal. That year we opened for The Doors in San Diego.

3. The door that opened my life to horticulture can, in part, be traced back to collecting rocks at the beach under the influence of some hallucinogenic substance. Wet rocks > make a turtle bowl from a bonsai pot > pot leaked > keep the pot > make a bonsai > looks pretty damn good > become a landscape architect (left out a few steps).

4. If I could get all the necessary nutrition I needed from only one food source, it would have to be spumoni ice cream.

5. When I was in 9th grade, I set off a smoke bomb in my own locker--MORON! My geometry teacher came out of his class, saw the smoke, pulled the fire alarm and shut down the school. Got called to the Boys VP office. Denied everything. Never got called back. Waiting for the other shoe to drop.

6. After a show with different band in Oakland, CA, went back to audience member Black Panther Huey Newton's penthouse on Lake Merritt and hung til dawn talking politics.

7. While in that same band (The Sisters Love, Motown), we toured with and opened for the Jackson Five. That's when Michael was still sorta normal.

8. While taking a bus from Athens to Patras in 1970, I met a Brit and told him I was from California. Like a fool, he stated, "Then you must know Alan Schwartz." Alan Schwartz lived around the corner from me.

9. I can talk exactly like Droopy, the cartoon dog. 'Cept there's just not much call for it.

10. I'd rather spend a night with a funky bassist than with professional call girl. Yes, funk drumming is that much fun.

Y'all have fun, ya hear? 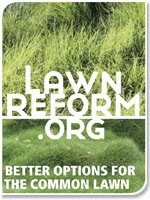