On the eve of the eve of the premiere of the next Garden Wise Guys TV show Sunday night, a local paper interviewed Owen and me for this article. Next time I hope The Daily Sound runs it past an editor, 'cause I don't think Owen and I will be "dawning" our tuxes anytime soon.
at 10:27 AM 2 comments:

It's called "repurposing" in some circles. I call it using every outlet I have to get the message out. I've posted an article at my bi-weekly Edhat.com column with a book review of my good buddy, Owen Dell's book. It's everything you might need to know about sustainable landscaping.

Many people lose site of the fact that all our man-made beautiful green outdoor spaces come at some cost to the environment - this book shows how to reduce the impacts and actually do something good for the planet.

There's also a bit of self-promotion, but that's just due to my love affair with myself. I am, as you know, the world's greatest authority on my own opinion.

Almost Foiled By A Cyclops 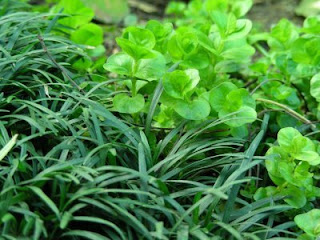 All I wanted to do was project some PowerPoint slides of planting combinations on the screen and teach my eager students to become brilliant designers. I had spent an hour picking out images that range from simple "harmony / contrast" studies to more complex garden ideas.

But instead, I was lured into a bloody battle between man and machine. Chaos erupted as I tried to get the goddamn computer to "see" the shiny cyclopean creature clinging to the ceiling, motionless, but whirring with delight. Step one, turn on computer; step two, turn on projector - zip, nothin', just 'HITACHI' in block letters on the screen. "Crap!" I muttered, barely audible to the class.

Okay, we'll just reverse the order of ops: Shut down projector, shut down computer. Step one: turn on projector; step two....... "DAMN! Come on, this is the high point of tonight's class!"

"No," thinks me, it's FU. One classmate suggests we all just gather around the 14" monitor that's connected to the computer at the lectern. So's I plugs in me trusty thumb-drive and the projector springs to life.

"What did you do?" everyone asked. Damned if I know. Here are a few of the images I showed them with a sprinkle of commentary. I'm feeling like a teacher today.

Green and Green
The pic at the top of this blog is a tight shot of dark green mondo grass (Ophiopogon japonicus) sharing the frame with golden moneywort (Lyssimachia nummularia 'Aurea'). Harmony? They're both green, one a dark conifer kinda green, the other a glowing disc of chartreuse. Very different leaf forms create the contrast. Nice marriage. 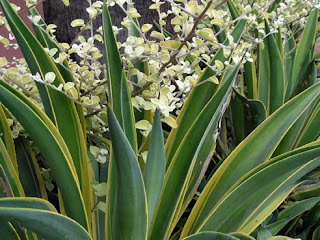 I love the contrast of forms--the chunky, sculptural agave with its gold slash along the edge and the vining extensions of licorice plant (Helichrysum petiolare 'Morning Light') reaching through. The gold marries the two decidedly different forms 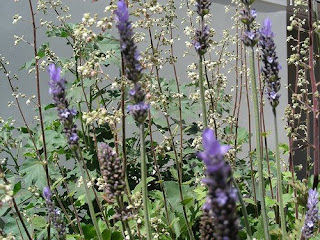 I pointed out to my students that the big event here is the rhythmic forms of blue lavandin (Lavandula 'Provence') and island alumroot (Heuchera maxima - CA native) rising above the foliage. Each has a small delicate flower, but their color and petal shapes set up a nice dynamic. The creamy alumroot seems so right with the soft lavender flowers. 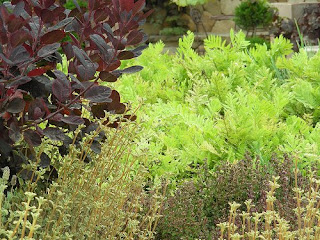 This one got lots of oohs and aahs. I like killer combos that challenge the students. I had a few volunteers take over the lecture, point out which where contrasting characteristics and where there were harmonious connections. They did pretty well. The dark leaf shrub is Smoke Bush (Cotinus coggygria) and the delicate yellow-green critter is golden tansy (Tanicitum vulgare - not sure of the variety).

The class ended well. No shots were fired, I didn't need to be escorted from the class and everyone thought they'd learned something.

If you're in the Santa Barbara area and want a one-day intensive planting design class, join me at the Santa Barbara Botanic Garden on Saturday, April 4. More info at they're website and click on Classes.
at 8:29 AM 9 comments:

Too Late to Hug These Trees

The photo is of a not-nearly-mature Ficus retusa nitida on Milpas Street in Santa Barbara.

Please don't hug these evil trees. Don't shed a tear. Kill them now while you have a chance. I just read in the Sunday L.A. Times a little blurb about folks getting up in arms about the removal of some mature Ficus (species name not included) trees along Colorado Blvd. That's the street where they hold the Rose Parade. I'm going to assume that these are Indian Laurel Fig (F. retusa nitida) and they never should have been planted in these spots. The tree is a monster. We're having the same debate here in Santa Barbara, but the issue goes all the way back to someone making a decision to put the wrong plant in the wrong place.

This tree gets huge and like any Ficus I've ever met, has aggressive surface roots. Perhaps all the arborists in Southern California should have done their homework in the 60s when thousands upon thousands of these beasts were unleashed in little planters along streets. They seemed to have a lot going for them in the hot summer climate of SoCal: fast growing, don't need water once established, dense shade. The problem is, given their ultimate size (I've seen them as tall as 80 ft. and about 50 ft. wide), they have no business on city streets, planted as property line hedges or tucked into little condo patios.

If I had a time machine I'd go back four decades and:
1) prevent them from ever being planted by throwing my body in front of the landscape crews;
2) buy a plane ticket for Pasadena's arborist to go to Malaysia and see how big these suckers get;
2) make a public spectacle of the wholesale nursery industry who promulgated the tree on hundreds of cities and private property owners without clearly warning them of the potential harm;
3) convince the powers that be to gradually start rotating out every other tree decades ago, so the impact of clear cutting wouldn't be as emotional;
4) Invest more of my personal income in gold (but that has nothing to do with this post, so kindly ignore what I just typed).

But now it's too late. Wanna save the trees? Sell your car, tear up the streets and sidewalks and let the trees grow in their natural way. While you're at it, move your water and sewer lines. Not likely. But as a public employee who shows up every day, puts on his "Kick Me" sign and dunce cap and waits for citizens to tell me "You don't know what yo're doing or you'd have a 'real job'" I can empathize with what the dudes and dudettes in Pasadena are wading through (hint - it smells very organic).

And it never stops. I just ranted about this in my last blog post and will likely continue, so I'll spare you any more. I want to bury a big time capsule somewhere with a butt-load of "I told you sos." But there are a bunch of Ficus roots in the way and I don't feel like digging a big hole right now.
at 11:00 AM 16 comments:

Wanna Plant Something? Get a License! 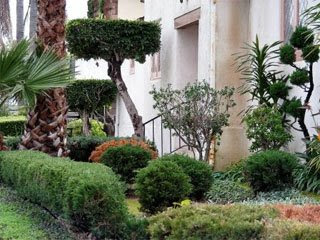 What's new this week? Only my latest hyperbolic wanking about people putting plants where they have no business growing. Why the hell can't people look up a plant in a reliable reference before they stick it in a planting hole?

It's not a 4x4 post you're putting in the ground. The sucker's gonna grow and there's no reason you should have to beat your brains out caring for something that's genetically programmed to swallow your house and crack your foundation.

Though the plants are Santa Barbara examples, the principles apply everywhere. Well, maybe not everywhere. I've never heard of lichens getting out of hand in tundra.