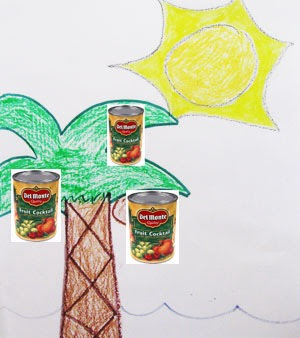 Imagine that you're walking down the street and get an urge for a triple-scoop cone of Everybody Loves Rhubarb, Lumpy Gravy, and Cioppino Siciliano. The saliva floodgates burst. A nano-second later, in a voice oddly reminiscent of dear old mom, your macrobiotic-hi-fiber-omega-3 conscience interjects: "Have a piece of fruit. It's good for you."

As luck would have it, growing right there in the parkway is a Magical Fruit Cocktail Palm (Phoenix delmonteana). Clusters of familiarly labeled cans hang within reach. Why, there's even a hollow in the trunk containing a handy can opener!

"What an enlightened and generous place I live in," you think to yourself. "Which forward-thinking civic leaders had the foresight to use fruit trees as street trees? Not only are these trees doing their part cooling the urban heat-sink effect (which, in turn, reduces ambient temperatures and lessens our dependence on energy-hogging cooling systems), but I can also increase my fruit intake!"

[For the sake of brevity I will agree that canned fruit is inferior to real live stuff. But it was cuter and quicker to produce a graphic with cans of fruit cocktail than to futz around in Photoshop all day.]

Better yet, what if instead of magical palms, your community planted trees that actually bear life-giving, palate-tickling, colorful fruit? It stands to reason: If you're going to invest resources in planting, watering and pruning trees anyway, why not get something back?

Not Such A Peachy Idea

I called Ron Combs, City Arborist for the San Luis Obispo, inquiring if SLO had fruit trees in their public places. Aside from the pavement staining olives in Mission Plaza, Ron couldn't think of any fruit trees in his inventory. He did, however, use words like rotten, messy, slip and fall, gnats and rats. "The concept of edible street trees sounds great, but they come with problems," he said.

Let's Give Me Something To Write About 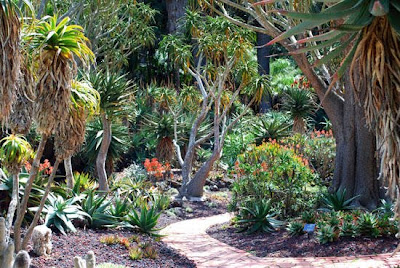 I love my readers - you folks rock. I ended last week's post with a plea for new blog topics and I wasn't disappointed. Well, that's not 100% right. Don't get me wrong, I'm sure many readers would find them interesting, but what these well-intentioned people don't realize is that some of their ideas require actual journalistic investigative reporting.

Which leads to the logical response "What the hell to you want from me? Professionalism?"

Here's the sitch: My typical month includes my bread-and-butter work as a landscape architect - you've probably seen my banner ad pop up here at Edhat from time to time. (Veiled threat: If you don't call about my design services soon, I'll drive past your house, take grainy black and white pictures and write terrible things about your garden in my next Crimes Against Horticulture article).

I'm also swamped with teaching, magazines writing, speaking gigs, the Garden Wise Guys TV show, playing drums with King Bee (the most fun I have without disrobing), family time, watching helplessly as my life get sucked into the Black Hole of Facebook, and following Biff the Wonder Spaniel's debris trail with a little blue bag.

I'm a busy guy - I've considering hiring a personal sleeper - so when my calendar reminds me that my Edhat deadline is barreling down and the wave of cold sweats subside, I spring into action and start writing.

Happily, there were quite a few doable story ideas in last week's comments. I'm excerpting them and responding below. Fortunately, this will be an easy column to write and I won't have to interview sources, travel or burn too many brain cells to meet my Thursday noon deadline, so here we go…

Mitzie ("I loved this article!") is new to Edhat and enjoyed the travelogue aspect of the last piece. "How about special botanical things to see…such as the best autumn leaves, succulent gardens in winter or wildflowers in spring." I'm up for the travelogues. I've pitched the idea of borrowing Ed's corporate jet and shadowing Anthony Bourdain No Reservations around the world, eating his leftovers, then breaking away for a garden visit in suburban Ouagadougou. I wrote about fall color last year (Keebler Elves and Chlorophyl), and have a few great sources for succulent gardens (this calls for a visit with my buddy Virginia Hayes, curator at Lotusland and columnist at the Independent and decades-long buddy).

Lots more great story ideas and comments at Edhat.com
at 10:34 PM No comments: 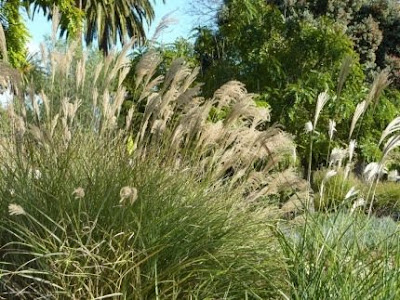 Close your eyes. (Bad move - now you can't read this. Change of plans...OPEN your eyes. Drat! What if you don't see that I just typed "open your eyes"?)

Sorry, let's start over. Imagine that you're looking out the breakfast nook window when an 18-wheel tractor-trailer jumps the curb, it's back-up beeper piercing the early morning calm. Air brakes hiss and the engine revs. The bed tilts skyward. As the tailgate creaks, a river of ping-pong balls floods your front yard.

You spring from the breakfast table as the truck pulls away. Tying your robe, you and your bunny slippers shuffle outside to inspect this curious cargo. Words are printed on each shiny orb: Miscanthus 'Morning Light' reads one, Cotoneaster dammeri, Artemisia schmidtiana 'Silver Mound', on and on, each sphere bearing the name of a different plant that grows in your region.

I don't know about you, but that's what it seems like when I start a new design project for a client - the realm of all possibilities. My Sunset Western Garden Book boasts "Over 8,000 Plants".

That's a smidge too much variety for the average residential lot. So how on Earth does an adventurous but rational gardener winnow all those tempting choices down to a manageable palette?

The Logic of Logic

Simple. Pop an old episode of Star Trek into the Blu-ray and unleash your uber-logical Mr. Spock. Shut down the "oh-but-it's-so-cute-with-its-sexy-maroon-leaf-bordered-with-a-darling-crinkly-chartreuse-leaf-margin" lobe of your brain. Delay your aesthetic gratification.