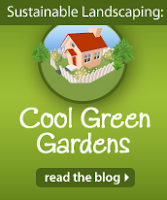 I've got my newest post up at my Cool Green Gardens blog at Fine Gardening. "You've got the fever (yea yea) I've got the cure!"

Based on a rigorous statistical analysis that I recently made up, I've detected the near pandemic expansion of One-Of-Each-Itis. You know you suffer from it, but your first step to wellness will come only when you admit you have a problem.

This tongue in cheek article ends with solid design advice that lets you buy on impulse but still end up with a strong design. I pondered how one of those "Maybe you should ask your doctor about..." ad might start...

Scene 1: Baby boomer couple, she in a mint green gardening hat with little pink Cecil Bruner roses on the band; he in his weekend Eddie Bauer sartorial splendor. They are meandering through a nursery looking at the vast selection of colorful, enticing perennials, discussing the merits of each. They are smiling and laughing, but as he continues to observe his wife, an ominous look of worry creeps over his face.

I've Never Posted One Of These Here!

I know, I know...GARDEN Wise Guy. But I'm JONESIN' to play drums and my band is finally getting back in the groove a week from Friday - May 29. But the real interesting thing is that writing the e-mail blurbs for this band was my first venture in writing. Now I've got my national blog at Fine Gardening - persistence pays off. 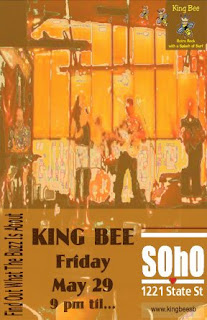 Recently, King Bee received a letter from a frustrated fan. Seems that he has been missing the therapeutic value of listening to and dancing to King Bee, which has had a an impact on his sense of well-being. We’ve missed playing, too.

While the current administration is working their way through the backlog of needed reforms to bring about a healthier populous, we thought we’d do our part and move things along.

Here’s an excerpt from the letter.

Dear King Bee, I’ve been suffering due to a lack of King Bee in my system. It’s having an affect on my well-being. I hadn’t realized how much better I feel after a night of, as the kids say, “Getting down and getting funky.” I talked to my doctor and he explained that endorphins are released when I’m enjoying myself aurally and engaging in moderate to aggressive exercise. He said that endorphins can produce a sense of euphoria. I did a little fact checking at Wikipedia and found this excerpt the explains why I like coming to hear you at SOhO. “A widely publicized effect of endorphin production is the so-called ‘runner's high’, which is said to occur when strenuous exercise takes a person over a threshold that activates endorphin production. Endorphins are released during long, continuous workouts, when the level of intensity is between moderate and high, and breathing is difficult. This also corresponds with the time that muscles use up their stored glycogen.” I think that pretty much sums it up. Please play at SOhO again really, really soon so I can experience a “dancer’s high”. Signed: Jonesin’ For Your Music

Please join King Bee at SOhO (1221 State St.) on Friday, May 29, 2009. We will strive to produce the necessary music that will activate your pleasure centers and keep you in tip-top physical and psychological condition. Though most of the treatment is covered by your current insurance policy, there is an $8 co-pay at the door. We highly recommend that you have a good meal consisting of some complex carbohydrates to maintain your stamina. Dinner reservations can be made at SOhO by calling 962-7776. Moderate doses of alcohol are also recommended.

Hope to see you there.


Visit us at King Bee

I was most flattered to receive an invitation from Ewa Szulc to be interviewed at her blog. Ewa and I have been great admirers of each other's blogs since we both "hung out our shingles" at Blogger.

Ewa wanted to know how blogging has changed my life. Given the recent development of my becoming the new West Coast blogger for Fine Gardening Magazine's web site, I had a lot to say. 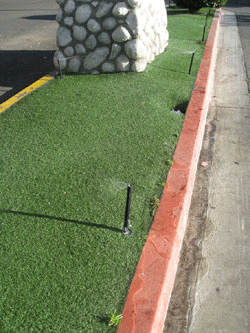 That's artificial turf you're looking at. Those are real sprinklers popping up through the artificial turf. That's real water coming from the sprinklers. I'll flaunt my expertise here, but artificial turf doesn't need to be irrigated (unless someone dumps a Coke on it or a stray jackal upchucks a bit of wildebeest carrion).

I received this curious, unimaginably absurd image from Alison Jordan, Water Conservation Coordinator for the City of Santa Barbara.

Once I got up off the ground and finished wiping my eyes, I pondered the amazing series of events that would lead to a situation like this. I'll assume they didn't install the pop-up heads specifically for this project. There are some weird people on the planet, but I just can't fathom a thought process that resulted spending money to install an irrigation system for Astroturf. God have mercy if I'm wrong.

I'll guess there used to be turf in this strip and someone decided to replace it with faux grass. Lower maintenance, looks "neat." I'll not comment on fake turf here, but I'm not a fan, for a number of reasons.

But someone had to have noticed during the prep stages of the installation that there was a sprinkler system in place. Duh! They CUT HOLES in the plastic to allow the heads to rise!!!

I can't go on. Please leave a comment and provide SOME logical explanation other than "just because we all walk upright and have opposable thumbs, we're not all of the same species."

Laid Off: My New Career Opportunity...

June 30 - poof, out the door after 21 years with the City of Santa Barbara's Parks and Recreation Department. I posted this article at my bi-weekly Edhat.com column. What floors me is the response from my community. I'm having a Sally Field moment: "You like me! You REALLY like me!"

One door closes and a whole bunch more open. Read on for recipes on making lemons into lemon sorbet.
at 2:51 PM 7 comments:

Why Would a Grown Man Call Himself Billy?

When I was a little kid, everyone called me Billy. My birth certificate says William, and I don't have a middle name. I kid that the hospital charged by the letter and my folks figured two names were enough.

By the time I hit junior high, I guess I thought I needed to grow up a bit. There's the urge to be older sooner. I even thought that turning ten made me a teenager, "ten" and "teen" are the same word root. So "Bill" it was for the rest of high school and a few years beyond.

The early 70s brought the writings of Kurt Vonnegut Jr. into my life. I devoured everything he wrote. He had a wonderfully macabre, dark sense of humor, a nice slightly sci-fi twist and was balls-out funny to boot.

It was Slaughterhouse-Five that turned me back into Billy. The lead character, a hapless, schlub of a guy, was Billy Pilgrim. I haven't regretted the name change.

“How come they call you Billy instead of William?”

“Business reasons,” said Billy. That was true. His father-in-law, who owned the Ilium School of Optometry, who had set Billy up in practice, was a genius in his field. He told Billy to encourage people to call him Billy—because it would stick in their memories. It would also make him seem slightly magical, since there weren’t any other grown Billys around. It also compelled people to think of him as a friend right away.
at 8:44 PM 8 comments: