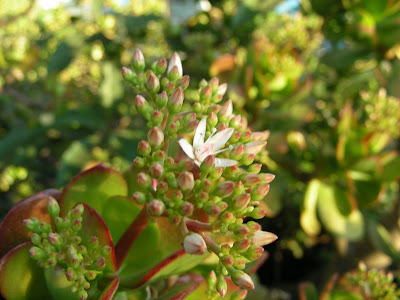 I’ve been cheated, hoodwinked, chiseled, deceived, cozened, deluded, lead on, betrayed, befooled, jacked, humbugged (I also found a great thesaurus program on line)!!!!! Earlier this week I had two days of fall weather—cool, sunny, breezy days; chilly nights. I even wore gloves and a cap on Wednesday when I took Biff the Wonder Spaniel out before sunrise.

I don’t like sweating. I hate the feeling of moisture between me and my clothes and it’s not practical to conduct my daily affairs in the au naturel (thanks, new thesaurus program!). I plan my lunch-hour walks based on the shadiest streets; I engineer open window strategies to maximize the slightest increases in air movement. My mastery of thermostatic manipulations is held in awe by co-workers, some of whom wonder if I’m curing a side of beef somewhere in my office.

I like nothing more than a slight chill in the air, sun on my face and mucking about in shorts and a thick Henley. You lizards can keep Tucson; this mollusk is hitching to Portland.

But the big news is that my “harbinger of winter” is out of whack. A few years after I got into plants and such, I made the correlation that when jade plant (Crassula argentea) bloomed, it heralded the end of summer and Billy weather. But this year it’s anyone’s guess.

Tuesday night I was going out the door for an “I hope Obama kicks some serious butt” party (he did!) and optimistically donned my favorite sports coat. It’s a beautifully crafted Harris Tweed coat (my wife found it in a thrift store when we were in college), a background of dark green with warm threads of brown, gold and a host of other greens running through it. It’s been hanging in the closet for months, calling to me. But here in Santa Barbara there hasn’t been a moment in the last eight months when it cooled down enough to consider throwing on even a flannel shirt.

Until the good weather arrives, I’ll be crawling under a rock and hangin’ til the mercury creeps down a skosh. 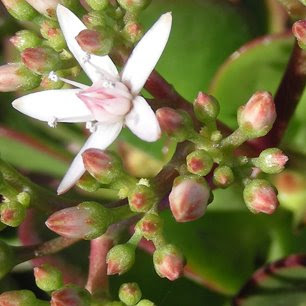 Aw, you poor, poor fella. (Sorry, but it is so very rainy and dull here, it's hard to muster sympathy for someone sweltering on the coast. I'll try, but no promises.)

I had the chance to move to Colorado and didn't. What was I thinking moving to the hot humid south. I like the curing comment. We say--cold enough to kill hogs but means the same thing.

I had to read your post more than a few times... It was so delightful, I had to go back again and then some to enjoy it all over again.
Philip

Kate - I'll trade ya for some rainy and dull any day. But if you come out here you'll have to be willing to walk my dog when we trade.

Anna - Hot and humid is my definition of hell. I did was "treated" to a July Caribbean cruise a few years ago and spent pretty much ever hour in an air conditioned space or in the water.

Philip - I'm glad I could put a smile on your face. Are you the Martian?

We like the sme weather! Before Thursday it was in the 70s and HOT for many many days. I was sleeping poorly. Now that it's 25-40 degrees, I'm sleeping wonderfully. And frankly, though I'm sad about the garden being dormant, it's rest means I can rest. I kept going back out there and tinkering, getting sweaty, and getting tired. WHO NEEDS THAT IN NOVEMBER? So I did rip off my clothes, protected by the fence I thought I'd be ok, but heard a woman scream near the street and turned to see....

Were you taken for a ride? It was unseasonably warm here last week--high of 70 on Friday and today (Sunday) the first snowflakes fell. Michigan, I tell you. And wait. What? Jade plants bloom?!?! I only know them as houseplants--I had no idea they bloomed. Is your genus/species different from what houseplants might be? For the record, I also hate hate weather.
~ Monica

Monica - no foolin'. Jade plant (Crassula argentea) flowers, like all crassulas. That five-point flower is the trademark. Just to make sure, got fat, circular stems with joints every few inches, chubby leaves, usually tinted pink around the edges when grown in bright light, and take virtually no supplemental water. Yep, flowers.

We just went from a 90-degree Friday to a 45-degree night with 50 mph gusts last night. Lost power 3 times.

This was so much fun to read, Billy, and to imagine you sticking to the shadows of buildings like a spy in an old Mad magazine.

Too bad your cooler night had to come with wind and power outages. We've enjoyed a couple of 45°F nights so far this autumn but my 34-year old Jade Plant didn't predict a darned thing. It made one small flower head years ago and quit the bud business.

Annie at the Transplantable Rose

thanks for the smile and hopefully cooler weather will arrive soon, I would be happy to send some from Canada

You don't like sweat? Don't EVER consider Arizona!
Aiyana

I suppose we're all learning to live with climate change - like it or not. I agree the weather has been having some wild mood swings lately, but my jade (here in San Diego) isn't ready to bloom yet.
Take heart. Mother Nature isn't out to get you - yet.

Rosemary / Aiyana - Welllllllll, maybe Canadian winter weather is a bit more than I'm hoping for. How about we split the diff with Aiyana's Arizona weather? I'm not a difficult person. I can compromise as long as everything ends up my way.

W.S. (just can't get myself to call you "weeping sore" - did you ever talk to your parents about that?). Funny that you're jade isn't in bloom yet. We've been popping for weeks. Must be the feng shui.

We also hate super hot weather here at Chiot's Run. I grew up in Colombia, S.A. and had my share of heat for a lifetime. I love gardening, but I also love the snow cover and cold cold weather.