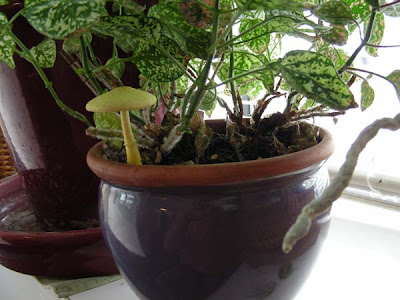 I run the plant rescue facility where I work at the Santa Barbara Parks and Recreation Department. My official title is City Landscape Architect, but whenever an office-mate's gift orchid or grape ivy begins to succumb to benign neglect, guess who adopts them. It's not that I have a great affinity for house plants (although that's one reason I got interested in plants in the first place). I just have a great south-east facing window ledge along one side of my office. That, and I actually remember to water them when they need it.
Enough preamble. A few months ago I became the adoptive daddy of a Pink Polka Dot Plant (Hypoestes phyllostachya). The plant had all but died a number of times, being a moisture loving specimen that had become rootbound in its original pot. So I cut it back to the nubs, repotted it in a slightly larger pot and it's been going strong for a number of months. I watered it. It lived. End of story?
Nope. Earlier this week I went to water it, and lo and behold, this absolutely perfectly formed, pale yellow funky fungus had sprouted along the edge of the pot! 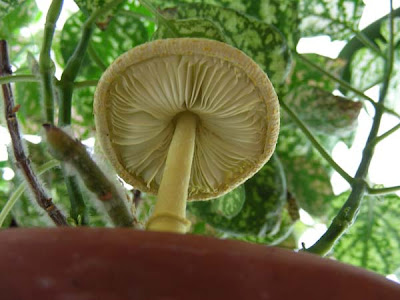 It's a pretty sure bet that some spores had taken up residence in the potting soil and the planets just happened to align the right way to have one of them sprout. Looking a little further into the pot, a similarly colored, miniature colony had also sprouted a few inches away. 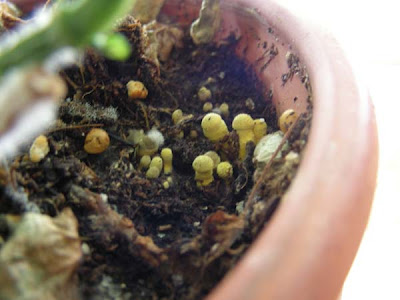 These were just stubby little, headless creatures with minor variations in their form.
Like a breathless little kid who'd just won the 3rd grade science fair, I carried this bit of botanical wonderment around the office, first to the co-worker who had surrendered her parental rights to the plant in the first place. The universal response was "That's not real, is it?" Not being an expert on these creatures and knowing that some mystery mushrooms had toxic tendencies, we all decided to view it from a responsible distance, rather than poke and prod.
I wish I could claim responsibility for this little bit of eye candy, but except for watering the cute lil dickens, I deserve no special accolades. By this morning, it had flopped over, turned a zombie-like shade of gray, and the thrill was gone. I hope it had enough time (and libido) to spread a few more spores. It would be fun to get a rerun of fun.
at 8:28 PM

Now this was well worth waiting for. How cool is that! I'd have been parading it around too. I hope there's more where this one came from.

having had experience with these in a couple of my pots... these are a poisonous species, but merely touching them won't harm you. They'd have to be eaten. You should get a flush of mushrooms every month or so, usually when you have adequate heat right after the plant has been watered. The potting soil is obviously full or organic matter, and that's what the fungus is eating, and transforming it into food for the plant... They're not causeing any real harm, except when they die off they can be a little messy, but they are cute as the dickens...

You do have a great photo of the mushroom looking up into the underside. Mushrooms are fascinating, and I don't see them often here as it's so dry. Can you take the plants home, or are they just for work? Happy GTS,
Aiyana

I love that you post a mushroom on Green Thumb Sunday...you are my kinda weird...

Yes, once you take in one plant, it kind of blossoms (hyuck hyuck) from there until you are given all sorts of wayward plants. My friend Wendy is chagrined every time the African violet she gave me (because it didn't bloom for her) blooms for me! (And it's not like I'm doing anything special with it.)
~ Monica

Holey moley, that pic from below is quite dizzying. Made me feel like a 3-inch-tall Alice. Got a hookah?

Looks like these little fungi have created a bit of a stir. Thanks for the info on them being poisonous, not that I was going to saute some shallots to go with them. Now I'll be keeping an eye out for how they resurrect.

I am always telling people that the plant "is NOT dead!" They don't always believe me, but I've rescued a few.

That mushroom is the coolest gift. You were rewarded by the plant fairy for your efforts!

GWG, are mushrooms ever a bad sign in a garden? I have a raised bed in which, rather suddenly, stuff stopped growing. That is, stuff I wanted to grow there would die off, but some dark color fungi/mushrooms started appearing around the same time.
I've heard some plants protect themselves by emitting a toxin that kills other plants--do mushrooms ever do this?
(I suspect they arrived in some free mulch from the county yard--should I be scared of the free mulch too?)
(How much anxiety can one comment contain?)

Queenie - I wish I could help you out with a good answer, but your question is a bit out of my expertise. I'll pass it on to my Owen, my TV show partner. He might have some info. If so, I'll post it or send a response directly to you. Thanks for stopping by.

2. Sometimes this is a sign of trouble, as with oak root fungus.

3. Other times it's a normal response to the presence of organic matter such as mulch. Lots of fungi show up to work on mulch.

As far as I know this is not a reason to avoid free mulch (though there have been other problems with it, such as excessive amounts of trash and from what I have heard some problems with toxic materials in it, but I've never experienced that. We use Marborg (bg - local trash hauler and recycler) mulch because the quality is better than what the County has.)

4. I'm not sure of the possible relationship, if any, between her die-off problems and the mushrooms. If this were my problem I'd take samples of shrooms and soil to the County Agricultural Commissioner's office and let the intrepid biologists counsel me. The service is free and very good. If you're really nice to them they'll even let you look through the microscope.

I was about to add plant food to one of my outdoor plants and when I picked up the leaves and branches a light purple pinkish thing about the size of an adult male fist was coming out of the soil...it almost looks like a potato coming out of the ground...I was wondering if it was a mushroom and if so if it is poisonous. I live in south texas and our weather right now for december is around the 60s and 70s.

December 2 Anonymous: I'd love to give you a bit of advice, but you've just read the sum total of my knowledge about mushrooms. I suggest you start with your local Master Gardeners program, if you have one in your region. If not, maybe a natural history museum? Better safe than sorry, so I'd just assume it's harmful unless you can confirm otherwise.