Don't Lean Against That Tree

I’ve been thinking about what to write about. I tried writing about what I want to think about, but that doesn’t really get me anywhere, since I have to think in order to write (I know it doesn’t always look like that to my readers). At the same time, I’ve been working on building my photo collection so I can put together nice presentations for my clients, showing them what the plants I want to use look like, and to enhance my lectures.

In a parallel universe, a few blocks away…I recently installed a feature in this blog and my web site that allows me to see who’s reading this tome, how long they stay around, how many pages they click on and (here’s the fun part) where they’re reading from. It’s a free service from Google Analytics and I highly recommended it to any bloggers reading this. I just added the feature a few days ago and have noticed readers from all sorts of exotic places like Canada, the Netherlands, Germany, England, Finland, France, Thailand and Lompoc.

Back to the photos…Today it occurred to me that since I live only a few blocks from Santa Barbara’s botanic masterpiece, Alice Keck Park Memorial Garden, I’d walk over there with my trusty Nikon CoolPix S10 and shoot Alice once a month to capture what’s looking good at various times of the year. Hence, I build my photo collection! 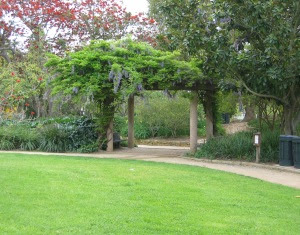 [Brief historical aside] If you’re not familiar with ‘Alice’, it is without a doubt the jewel in the crown of the Santa Barbara park system. Named for it’s benefactor, Alice Keck Park (yes, her last name was Park, so it could have been called Alice Keck Park Park, but cooler heads prevailed), it was the site of the El Mirasol estate of the Herter family in the early 1900s, then became the El Mirasol (sunflower, en español) Hotel. 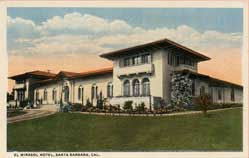 There was actually a proposal from a local real estate developer (who shall remain nameless, for now) to erect two 9-story condo towers on the site in about 1969!

“Alas,” thought I, entering the garden in late afternoon. “November is not exactly the time of year for great floral displays and sumptuous photography.” But off I went to give it a try. As I was lining up a shot of a soft shell-pink Canna Lily, I thought about those folks in Germany and the Finland and what November probably looks like in their gardens. So I checked. Berlin – High 48 F / low 33 F. Helsinki – high 35 F / low 27 F. I’ve also got some regular readers in the northern US where evening temps are dipping into the low 30s and upper 20s.

“Hmmmm…How, under the guise of horticultural education, could I rub it in that here in our Mediterranean climate, where most of us are just now thinking about donning a sweater in the evening or switching from flip-flops to shoes with socks, we have a lot for which to be thankful. I know – I’ll put my Alice photos on the blog! ”

So here are a few bits of eye candy to get the ball rolling. I’ll try this for a few months and see what comes of it. Leave a message if you want more articles like this one.

The first thing that caught my eye arriving at the park from the intersection of Arrellaga and Santa Barbara Streets were the shimmering pink blossoms of the Floss Silk Tree (Chorisia speciosa). 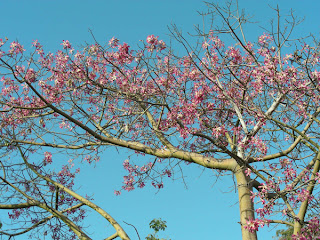 These are truly exotic looking trees originating from Brazil and Argentina, and are related to the African Baobab, though the trunks aren’t as distinctively “bloated.” Most stunning right now are the five-petaled pink flowers with tiny brown-on-ivory leopard spots. 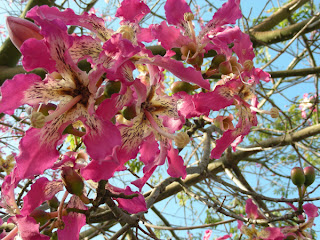 There’s also a white flowering variety at Alice. But perhaps the most distinctive trait is the massively thorny trunk that some (but not all) of the trees develop. I can’t imagine even a rhinoceros with poison oak rubbing up to one of these bad boys. 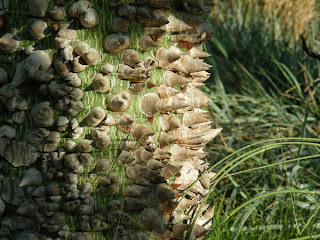 Later in the year I’ll catch a photo of the floss-like fuzz that bursts from the seed pods, giving the plant it’s common name.

Just a hop and skip from these spiky beauties is a display of giant tree dahlias (Dahlia imperialis) that I await every fall. There are dahlias and then there THESE dahlias. This perennial appears to be on steroids, growing from little stubs that were cut back to the ground the previous year, into 12-foot high 3” diameter stems that rival some timber bamboos. 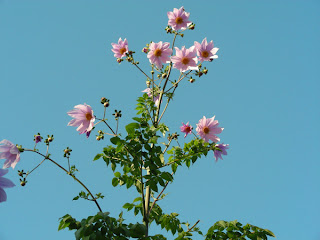 And in the fall, beautiful sparsely distributed lavender flowers with yellow centers appear. 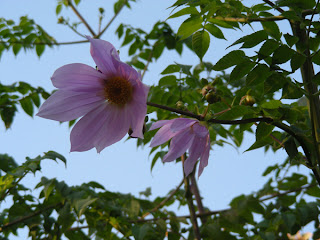 It’s a marvel what nature can program a plant to do. Kids go nuts keeping track of the growth. If nurturing a 400 lb. pumpkin is out of the question, this is one plant that will get everyone’s attention.

Got time for one more? Good…Here’s a little oddity. Many folks, regardless of whether you live in the land of winter sandals or snow shoes, know the Aloe plant. The most familiar of these South African succulents is Aloe vera, used to treat burns and other skin inflammations. But have you seen an Aloe that can scamper up palm tree? 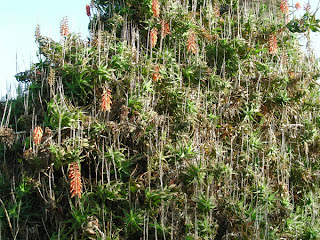 Climbing Aloe (Aloe ciliaris) has orange flowers almost year round, stems about the diameter of a pencil and short white cilia (barbs) that protrude from leaves and stems to trap neighboring upright branches and bark, allowing it to lean against trunks and continue to mound up on itself. Unlike vines that actually spiral around branches, climbing Aloe holds on more like Velcro. It’s growing up a Date Palm near the pond if you want to check it out.

I’m about Aliced out, but look for more articles this month. I have quite a few more pictures and a few woe-filled stories to unload. Comments would be greatly welcome, especially from those of you whimpering inside your igloos.
at 8:59 AM

Thanks for the comment on my blog leading me to discover yours! I'll be back again...I'm enjoying your thoughts and will put your link on my roll soon!

Lovely, thank you! I used to live in that area and daily visited the garden. It's off my track now but your article entices.

It's not "now" now (except of course actually). How about posting the name of the 1969 developer, saving those of us interested tons of time digging it out elsewhere?

thanks for your blog

LOL Although I live next door to Germany I still have a lot of blooms in my garden (see my blog)in November.

Love that Floss Silk tree, it's gorgeous, wish I could grow it too but then again I can grow things that you can't in Santa Barbara. ;-)

As we say here in the States, you hit the nail right on the head. What's common for gardens in one climate become the envy of others. Thou shalt continue to covent thy foreign neighbors' plants.