Not All Grass is Evil - Alice’s Fall Beauties

Where do you go to hear someone rant about grass? Everybody…shout it out… “The Garden Wise Guy’s blog! He wrote that article about Murdering Your Lawn and another on how to rid yourself of the corpse.”

But don’t get me started about my love of all the other grasses! Tall grasses from the prairies of North America that used to feed herds of buffalo. Exotic striped Maidengrass species from Africa and Asia that dance on the slightest breeze. Blue Oat Grass with its stiff silver stems, like a 70s Rod Stewart hair cut.

I don’t use grasses in every design, but they are the “go to” plant for creating informal naturalistic compositions or for inserting a strong vertical burst in a bed. Also, if you have breezes that frequently pass through your garden, the tall grasses will jump to life as the air movement animates their tall flowering stems.

Alice has a nice menu of grasses, but it’s by no means exhaustive. All of them will grow in just about any Santa Barbara garden and fit perfectly within the parameters of sustainable gardening. Many ornamental grasses need little supplemental water, are virtually pest and disease free, and don’t require fertilization. That’s what I can sustainable.

Here are a few I spotted on my photo tour at the beginning of November. I’m also throwing in a few non-grasses that provide a similar impact. Let’s just go at it alphabetically…

A is for Arrhenatherum elatius bulbosum 'Variegatum', but you can just call it Bulbous Oat Grass. 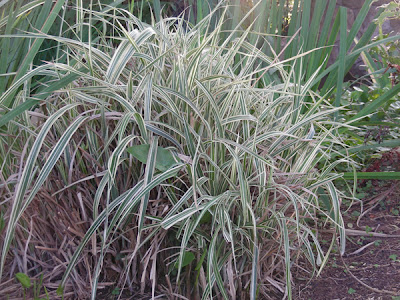 This particular plant is growing in a bed close to the northwest quadrant of Alice. It’s in a somewhat shady bed so the white stripes (‘variegation’ is the term we use) brighten up the composition. It spreads slowly and only gets about eight inches tall.

Along the Santa Barbara St. side of the park is a dried stream bed with a pretty nice variety of grasses and grass-like plants. There are four silvery leaf players and one of my favorite tall grasses. When I look at this area, it’s like little fireworks are going off – all the leaves and flowering tassels heading skyward create a burst of animation that contrasts nicely with the various ground covers.

Could there be a cooler name for a plant than Silver Spears? Astelia chathamica isn’t a grass. It’s from New Zealand and in the Lily family, so it’s not even closely related to any grasses. 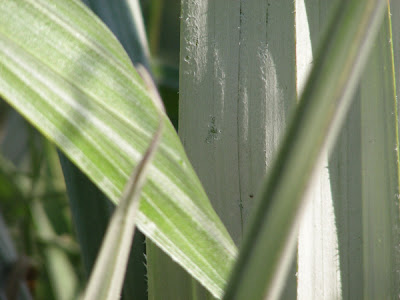 But it’s sharing a mostly-grass bed and with its wide, brilliant leaves, adds just enough textural variation to add a bit of life to the bed. This close-up shows the chalky coating that gives the plant its common name.

Nearby is Blue Oat Grass (Helictotrichon sempervirens – looking a little tan this time of year) set among a very similar grass named Blue Fescue (Festuca ovina glauca). They have almost the same color, but the Oat Grass looks like you took the Fescue and resized it by 200% on a copier. I like that effect – a very subtle play of contrasting sizes with all other visual elements (form, color, texture) remaining the same. 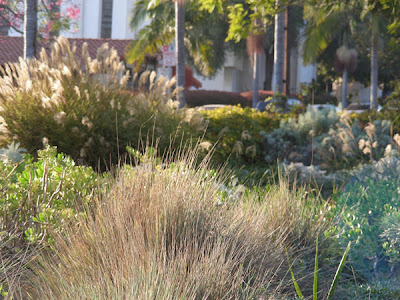 That big guy in the background is another form of Miscanthus.

There’s one other very silvery grass here. Canyon Prince Giant Rye (Leymus condensatus ‘Canyon Prince’) is a Channel Islands native selected, propagated and introduced by Dara Emery and the Santa Barbara Botanic Garden. It stands about one to two feet high, has a beautiful flowering tassel in the summer, and reflects sun in the late afternoon. At Alice, it’s been gradually spreading by underground stems (rhizomes) and has filled in nicely among the boulders.

But the big kid on this block is Miscanthus ‘Morning Light.’ 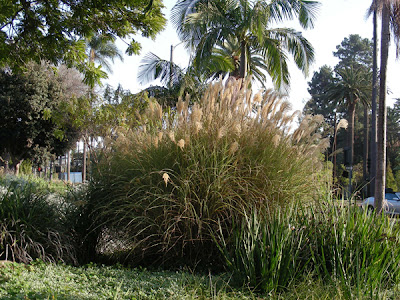 It stand about shoulder high and when it flowers in the summer, only a pro basketball player could reach the tops of the flowers. This is one of those plants you want to have when the breezes kick up. It’s also a plant that should be cut to the ground before spring so it can completely regenerate as the weather warms. I don’t see that as a problem but something to look forward to. Imagine this giant mass just disappearing for a few months, leaving the garden open and revealing whatever was growing behind it. Then, in a few months, it’s back and booming! Kinda like removing a big piece of furniture from the living room for a while.

One more grass-like treat and I’ll let you go…Fairy Lily (Zephyranthes candida) – the name says it all. 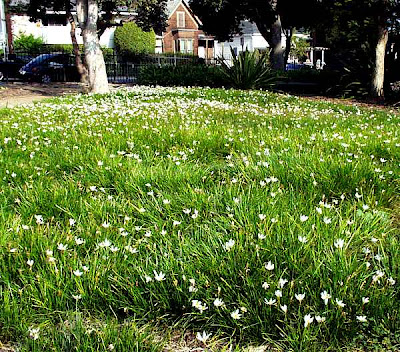 It’s native to Argentina and Uruguay and creates a great meadow of dainty white flowers. It’s a little more thirsty than some plants, but it is a bulb, so if you cut back on the water, it tends to just show up again after a good soaking. I like it mixed with some low grasses and ground covers.

Here’s what some of these dudes look like all put together. 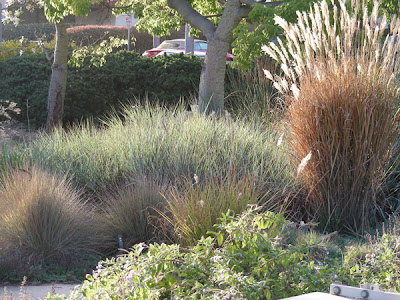 Maybe this will encourage you to explore the world of grasses. The west coast’s most active proponent of these and other grasses is John Greenlee. Pop over to his web site for a little more propaganda!

And hats off again to Grant Castleberg, the original designer of Alice and a landscape architect who continues to remain active in the design of this gem. His wife, Ann-Marie wrote a fabulous book that's available at our local Chaucer's Books and also on-line (but please shop locally!). It's beautifully printed with photos by Ralph A. Clevenger (another Santa Barbarian).
at 8:40 PM

I have always loved Alice Keck Park "Park". It truly is a little gem.

I have Zephyranthes mixed in with my buffalograss and never water it at all. Whenever there's a summer thunderstorm, though, this meadow planting is covered with beautiful flowers.

Ornamental grasses are quite common in Austin. This year, they seem to be especially beautiful and I've found myself wanting to acquire all sorts of grasses. When faced with so much beauty it's easy to forget the reason I've failed with ornamental grasses in the past is that my yard is mostly in the shade.

I enjoyed looking at your photos and dreaming of a garden in the sun.

Mss: Glad you enjoyed the grasses. I somehow endurded 20 some-odd years of designing landscapes without a good knowledge of these fabulous plants. It's only in the last 10 years I've started exploring.

There's a great book on grasses written by John Greenlee (can't recall the name right now) and he has a section of shade tolerant selections. Might be helpful. I like Miscanthus 'Morning Light' and Arrhenatherum to brighten up moderately shady areas. They tend to grow a bit more loosely than if you have brighter light, but they still do the job.

Thanks for popping in!

oh... I want to rip out all the junk in the yard here and make a beautiful space...your pictures are quite inspiring!

They have ornamental grasses all along the side of the road...the real plus was the cloud of butterflys that came through, attracted by the flowering.

Ornamental grasses are great and very much in fashion in Europe. The famous Dutch garden designer Piet Oudolf started this craze(doubtlessly with the help of some other folks as well) years ago. Have you read some of his books on grasses and other plants?

I've visited Piet's own gardens twice now, once in June (of this year, see blog) and once at the end of October (last year, see blog). Both times his gardens looked great, this man practiced what he preached.

Yolanda: If you get some time with Piet Oudolf, please thank him for starting a wonderful movement in garden design!

Susan: thanks for popping by. I'm looking forward to having this Alic tour be a monthly adventure. Stay tuned.

My wife pointed me to an article in either the Thanksgiving weekend Sunday Parade section of the paper, or another weekly insert, and the garden writer listed Garden Rant as one of her two or three favorite blogs. Congrats!